Book of Dead slot by Play’n GO is easily one of the more popular slots on the internet. Despite the fact it’s been around for a few years now and that there are many more modern and arguably exciting games in the market, players keep going back to this Egyptian-themed game because of its familiarity and, more importantly, the ability to produce big wins. 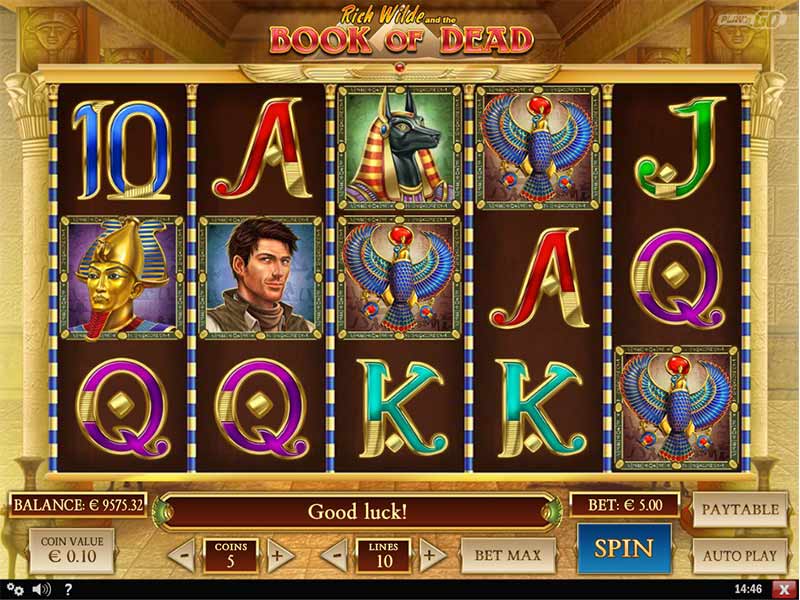 Launched in 2014, Book of Dead by Play’n GO features RTP of 96.21%, which is quite decent and in line with many modern-day slots. The game offers 5 reels and 10 payline but players are free to choose to play anywhere from just one to all ten. Also, the betting range is quite wide, from just 0.01 a spin all the way up 100 or even more on certain casinos.

The game’s theme is quite familiar and has been featured in many slots over the years. Reels of Book of Dead are set inside of an ancient Egyptian pyramid, with symbols such as scarabs, pharaohs, Anubis, etc. The highest paying symbol is the explorer symbol, while the book serves both as a wild and a scatter, triggering free spins.

While the graphics aren’t anything spectacular, this slot offers smooth and enjoyable gameplay with sharply designed symbols and a lot of bright colors to keep your attention. Slow spins whenever there are two scatters on the reels add to the overall atmosphere of anticipation as well as suspenseful music playing in the background.

One of the reasons this slot has become so popular is also the fact many casinos give out free spins for it. If you’d like to try your luck with this game with no risk involved, visit CasinoReviews.net.nz and get a free bonus on Book of Dead.

The bonus feature in Book of Dead is triggered when you land three or more scatters anywhere on the reels in a single spin and it is in the bonus that this game is capable of producing some truly great wins. In general, the bonus feature isn’t that hard to trigger, although the game can go a few hundred spins without landing three scatters if you’re unlucky.

Once the bonus is triggered, players are awarded 10 free spins and a randomly selected expanding symbol. Similar to other book-type slots, this symbol becomes a scatter in the bonus, expanding on the reels to create winning combinations. Two symbols in a spin are required for higher paying symbols while three are required for playing card symbols (10, J, Q, K, and A).

Of course, triggering the bonus with the explorer symbol as the scatter is the Holy Grail in Book of Dead. The full line of explorers pays 500x the bet, so landing five of them in the bonus offers a payout of 5,000 times the bet. The golden pharaoh, which is the second-highest paying symbol in the game pays 200x for the full line and 2,000x for the table-full in the bonus.