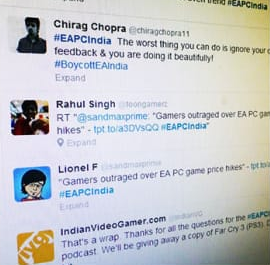 Varied opinions have surfaced under the hashtag, with some questioning the reasoning behind the hike while others expressed that such a move will only drive more gamers to resorting to piracy.

According to EA, the move behind the price hike is the company’s goal to make all games $60 across the globe. EA discovered that gamers that live outside India have gained VPN access and took advantage of the country’s lower prices on games. This issue became apparent during Battlefield 3 Premium’s release, which forced EA to put a halt on the Indian store preorder. And the same issue was encountered at the SimCity release, which prompted a market pullout of the game and then re-released at a higher price.

Regardless, Indian gamers have been quick to point out that it is unfair for the Indian market to get penalized for a technical deficiency committed by Origin.